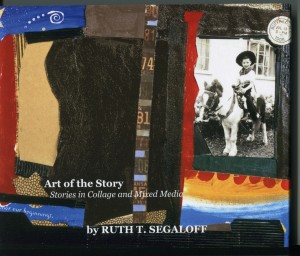 ART OF THE STORY by Ruth T. Segaloff

Three generations of Segaloff’s family have been artist storytellers, and this legacy was passed on to her. After graduating from Washington University in St. Louis, she joined VISTA, the domestic Peace Corps. She was stationed on the Nez Perce Indian Reservation in Idaho, where she came to appreciate native traditions and art. After completing her VISTA service, Ruth attended Rutgers University, where, in 1969, she earned a Masters Degree in Social Work and moved to Boston. 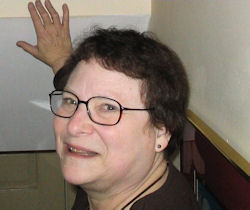 Segaloff grew up in New Orleans during the nineteen fifties, at the violent beginnings of the civil rights movement and at the height of Joseph McCarthy’s Communist witch hunts. While she was attending college, John Kennedy, Martin Luther King, Jr., and Bobby Kennedy all were assassinated. The Vietnam War, begun under JFK, gave rise to the anti-war movement, and the brutal response of President Lyndon Johnson’s Administration. These traumatic events greatly influenced her, and peace and social justice have been common themes of her artwork.

Stories have been central to Ruth’s forty year career in social work. She retired in 2008 to become a full time artist. Despite limited formal arts training, she has found considerable success. Her new career officially began in 2007, when she created “Stories in Collage & Mixed Media,” and had a solo show, “Lest We Forget,” in the T. Ross Kelly Family Gallery @ the Watertown Free Public Library. Her resume details the formal art shows and exhibitions up to the present.

In addition, she has shown her artworks in medical and mental health settings based on her conviction that Art is Medicine: Tufts Dental School Clinic; Harvard Vanguard Health Center/Watertown (solo show); Harvard Vanguard Health Center/Wellesley (Visual Services); Riverside, a mental health program in Newton; and in the Newton-based clinic, Neuropsychology & Educational Services for Children and Adolescents (solo show).

In addition to her work as an artist, Segaloff volunteers as an artist/mentor in programs benefiting from these healing powers of creativity. Settings have included Medicine Wheel Productions in South Boston; Girls, Inc., in Lynn; Portis House, a shelter in Jamaica Plain for mothers in recovery and their children; and the Boston area Sjogren’s Syndrome Support Group, for a those suffering from that chronic illness.

From 2011 to 2016, she created and led the Therapeutic Arts Journal Writing Project for incarcerated women at a minimum security/pre-release center.  Her work there was sponsored by S.O.A.R. 55 (Service Opportunities After Reaching 55), an AmeriCorps Senior Corps program based in Newton.